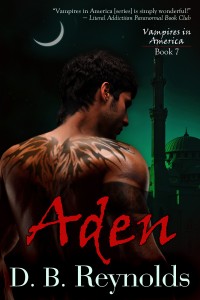 Yes, like you, I’m anxiously waiting for ADEN’s release. I have the advantage of having read (and, ahem, written the book, but I’m anxious for all of YOU to read it, too. For those of you who might have missed it, we released the teaser scene earlier this week. You can find it HERE!

Given the nature of the teaser, someone asked if ADEN was another 50 Shades. Let me say this clearly and unequivocally … NO! Aden has a very dominant personality, both in bed and out of it, and he has a very complex and complicated sexual history which is reflected in his sexual tastes. As always, there is sex in the book, but the STORY is about far more than that, and there’s way more to Aden than his sexual preferences.

But you’ll just have to wait and read the book to find out what that might be. 😀

While you wait, don’t forget the Cyn and Raphael mini-short story that’s still up at PARANORMAL HAVEN. There are still a couple of days left to get in on the giveaway there, too.

Books … I’ve updated my 100 BOOKS in a YEAR CHALLENGE and MY GOODREADS PAGE to add the last 10 books I read, including the first five Rock Chick books. What a great series title! Wish I’d thought of it. I think Cyn would make a great Rock Chick, and Raphael would fit right in with all the Hot Bunch guys … for night work at least. I’m now reading the latest by the brilliant Nalini Singh, ARCHANGEL’s LEGION, and loving it so far.

Big Screen … I saw Ender’s Game this past Friday. My sister and I went at 1:00 to avoid the crowds and saw it in a largely empty theater, just a few other mid-day viewers with us. Having read the book and thought it was one of the best Science Fiction books of all time, I have mixed feelings about the movie. The special effects and visual effects were fantastic. I’d have liked to see it in 3D to get a better feeling for the battle chamber, but the 3D showings seemed to have been limited to the night before pre-showings for some reason. Weird. If any movie screams 3D it’s Ender’s Game. Anyway, they did a decent job of translating the book to the screen. It felt a little rushed, but they got the heart of it.

For my part it’s NaNoWriMo time. I’m caught up once again with my werewolves and demons, writing Book Two and hoping it won’t be much longer before you all get to see these stories. I’m making good progress, though it’s only the third day of the month, and much too early to predict an outcome.

In the meantime, hope you’ve found some great reading to pass the time, and I’ll see you next week!

7 thoughts on “WAITING FOR ADEN!”