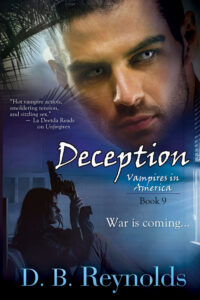 AUDIBLE.com Amazon.com Amazon.ca Amazon.co.UK Amazon.com.au BN.com KOBO MARCH 31, 2015 Kauai, Hawaii—tropical paradise, vibrant jungles, turquoise seas . . . and sensuous nights that hide vampires so powerful they can change the world. Raphael—powerful, extraordinary, arrogant. He’s been eliminating rivals and gathering allies, determined not just to survive, but to demolish the Europeans who think they can steal what he’s worked for centuries to create. In a final bid to avert a war that seems inevitable, Raphael agrees to meet an enemy he knows of old. She is formidable, wily, and not to be trusted. But in his arrogance, Raphael believes he can foil whatever treachery she has brewing. Cynthia Leighton—Raphael’s human mate, beautiful, smart, and deadly when threatened. She doesn’t trust anyone, much less a powerful vampire claiming to want peace. So while Raphael prepares to negotiate a treaty, Cyn is preparing for the inevitable double-cross that she knows is coming. Raphael worries about saving thousands of vampire lives. She only cares about one, and she will do anything to keep him alive and in her arms. When Cyn is proven right, when it all falls apart and Raphael’s enemies draw on ancient magic to trap him, taking him away from Cyn and out of the war, it all falls to her—to find Raphael, to save the thousands of vampires who will die if she doesn’t succeed . . . and to kill every single being, human or vampire, who gets in her way. REVIEWS A great thing happens in Deception. Cyn and Raphael take on roles fans have yet to see them in and the shakeup gives a fresh spin to the couple that’s the heart of this series. PARANORMAL HAVEN A fast paced and smooth flowing plot full of suspense, action and romance keeps readers on the edge of their seat with spine tingling expectation and excitement building throughout the story as the battles begin. The well written scenes and details paint vivid images that capture the imagination and the reader can practically feel the energy and emotions that vibrates from the characters as set out to turn the tables on the ones who dare mess with them and the well orchestrated events ensure that there is never a dull moment along with unexpected twists that surprises the reader as well as the characters – Cyn certainly gets a surprise from the past. …..LITERARY ADDICTS