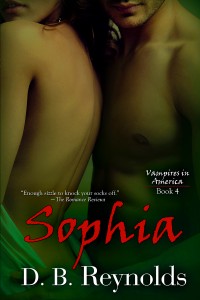 The Pacific Northwest . . . home to lush forests and constant rain, to lumberjacks and computer geeks, especially those of the vampire kind. . SOPHIA, beautiful and deadly, has spent the last hundred years dancing her way through the balmy nights and hot-blooded men of South America. But when her Sire sends an urgent summons, Sophia rushes home to Vancouver only to find he has disappeared, leaving nothing behind but three dead vampires and a letter with Sophia’s name on it. COLIN MURPHY, a former Navy SEAL, came to the Northwest seeking a quiet place to heal the scars earned in more than a decade at war. But when someone starts killing local vampires and torturing their mates, Colin takes on the mantle of a warrior once again as he sets out to find the killers and do whatever it takes to stop them, even if that means hunting with vampires. Following her Sire’s trail of death to a small town in northern Washington, Sophia unexpectedly discovers the heat of a South American night in Colin’s arms. But all too soon Sophia and Colin find themselves in a race to uncover the killers before the next dead vampire is Sophia herself. . . . REVIEWS . . –The Romance Reviews I’ve been a avid fan of the Vampires in America series from the beginning, and I think it’s safe to say this is the best book in the series to date. With an intriguing mystery, a resilient heroine and enough sizzle to knock your socks off, this is D.B. Reynolds at her very best. . –Fresh Fiction  (FreshFiction.com) Remarkably fresh and stunningly beautiful! Sophia is as enchanting as she is dangerous! . –Bitten By Paranormal Romance (BittenByParanormalRomance.com) I could gush on and on about this book, but I’ll just hit on the things I enjoyed the most. The witty repartee between Cyn and Colin, and the close relationship they develop. Raphael and Cyn: She gives as good as she gets. Duncan, Duncan, DUNCAN! The plot twists and turns. The violent encounters and sexy escapades! . –Joyfully Reviewed (Joyfullyreviewed.com) Sophia is a sexy paranormal story with tons of high octane action. . –RomFanReviews  (RomFanReviews.com) Full of energy, suspense and of course hot vampires this is a must read. Sophia proves herself to be a stronger vampire then she thought she was capable of and Colin is her mate in all ways possible. It also brings back Raphael, Cyn and Duncan as well which is always an added bonus. I am anxious to see what Ms. Reynolds brings us with her next book DUNCAN and takes us again into this amazing world of vampires.