As promised (actually a week earlier than promised) WE HAVE A WINNER in the Name That Woman Contest.
.
CHARMAINE! Come on down! That’s right, our winner is Charmaine of Cara*@jun*(dot)com. Obviously, I’ve edited/redacted Charmaine’s email address for her protection, but I’m sure she’ll recognize herself!
.
I’ve also sent Charmaine an email directly notifying her of her winning status. Charmaine now has until 12:00 a.m. (midnight) PST on April 29, 2012, to contact me (dbreynoldswriter@live.com) and confirm her acceptance of the wonderful prize package, which includes the right to name a character in the forthcoming, and as yet unnamed, Book Seven of Vampires in America, as well as a signed print copy of that book!
.
In other exciting news, I finished and filed my taxes. Bleah!
.
I have also, sadly, finished reading all of Vince Flynn’s Mitch Rapp books! Oh no! I’m currently experiencing withdrawal symptoms, which are alleviated only by the knowledge that there’s a new John Sandford Prey book out next month, and a new Nora Roberts stand-alone out this week. Plus I’m trying a couple of new (to me) authors as a substitute for my beloved Mitch Rapp. ::sigh:: Also, I’ve already started Lara Adrian’s newest Breed book Darker After Midnight, and downloaded Karen Marie Moning’s next two Highlander books. Her Highlander series isn’t as good for me as her Fever books, but still very good. At least, none of the female leads are as irritating as MacKayla. Not yet anyway. 😀
.
Speaking of great forthcoming books, my writing partner Steve McHugh has posted CHAPTER 1 of his forthcoming 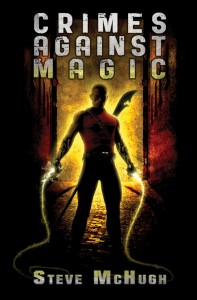 Crimes Against Magic, which will release on April 30th. He posted the Prologue last week, so this is another chance to get a glimpse into this wonderful fantasy/adventure story. CHECK IT OUT!
.
On the TV front, I watched tonight’s Game of Thrones ep, and found it rather uneventful. I don’t really care about the wimpy Theon Greyjoy (the guy whose father has the ships), although I do wonder if those people ever bathe or brush their hair! LOL The M/M scene between Renly Baratheon and his lover (also his wife’s brother, btw) was distinctly un-hot. Surprisingly so for an HBO series. Remember Eric and Talbot? Even that was hotter and Eric was faking it! Hopefully next week will be more eventful.
.
You’ll be happy to know that LUCAS is very nearly finished. I’m already contemplating the next book. I know its location, I know its general plot, I even have a good idea of the new vampire lord’s character, but … I need a name for him. Which means I need an ethnic background. Book 8 will be Mexico, which means a Latino vampire lord, but what about Book 7? Any ideas, readers?
.
Okay, that’s it for me this week. Short and sweet, because I’m in the middle of a big battle with Lucas and Kathryn (not between them, they’re on the same side for this one.) Gotta get back to the bloodshed!
.
Have a wonderful week. (And U.S. readers, try to forget all the money you just turned over to Uncle Sam.) I’ll see you all back here next Sunday night, same time, same place.
.
xoxo
DBR