Happy Memorial Day Weekend to my readers in the U.S. This is the official start of summer, the first long weekend of the season. There will be barbeques, parades and parties. But in all of our celebrating, let’s not forget the real reason for this day, and that’s to remember all of those who came when called, and who gave their lives for their country. 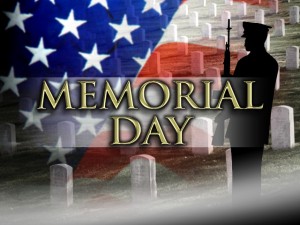 As I mentioned above, this weekend kicks off the summer holiday. People are graduating and getting married, taking well-earned vacations and just kicking back. So, just in case you’re heading for the beach and want something quick for your e-reader, my VAMPIRE VIGNETTES are now available in Kindle format through the Kindle Owners Lending Library. The library is open to anyone with an Amazon Prime Membership. You can only borrow one book at a time, but you can keep it as long as you need to. I’ve borrowed several books from their library, and it works really well.
.
Oh, and … LUCAS is done. At least in this round of things. Yay! I need to check one little thing, then it’s off to my writing partners. And I miss him already. It’s so sad. Of course, before long I’ll be back with him as I do revision after revision, but for now I miss the vamp.
.
Small screen update … This week’s GAME OF THRONES was … meh. Lots of yelling and screaming and stabbing and crunching. SPOILERS!!! And can someone tell me how Tywin Lannister (father of all the Lannisters, not his similarly named youngest son, Tyrion) … anyway, how did Tywin’s horse-mounted troops show up on the seaward side of the gate? How’d they get there? Swim?? Meanwhile, THE KILLING is slowly winding down to reveal the killer. SPOILERS!! Of course, by this time, everyone’s lives have been ruined. Sure, poor Rosie is dead, but her parents are broken, her brothers permanently damaged; Linden has lost her son, her fiance’ and maybe her job; Holder has discovered that his sponsor—the man he credited with saving his life, the man he considered a hero—thinks of him as a loser junkie; Aunt Terry has been revealed as a hooker; Darren Richmond has been crippled for life (and no more sex life, either,) and Rosie’s teacher Ahmed will be LUCKY if he survives at all, and will undoubtedly have brain damage if he does. Anyone else?? Sheesh. while waiting for the last few KILLING episodes, I’ve started a new DVD series for my exercise distraction, one recommended by some readers, and that’s WAKING THE DEAD, which is a BBC series. I’m still getting over the differences between U.S. and U.K. police procedure, but it was only distracting for the first couple of shows. Now, I’m into it, and I’m only on Season 2, which means I’ve lots of shows to catch up on. Though it’s somewhat inconvenient that every case takes two episodes to be solved, which means I never get the whole story in a single bout on my Elliptical! LOL
.
On the smaller screen … I posted 4 new reviews on my WHAT I’M READING NOW page. The four reviews actually represent 6 books, since I included all three of the existing Richard Castle books in one review.
.
So … LUCAS is almost on his way, which means I now turn to the Cyn/Raphael e-novella. I always love spending time with those two. They were my first, after all. And some of my relatives have been known to suggest that Cyn is me. (I wish!) So, it’s like old home week when I go back to their story.
.
I’m going to get back to LUCAS and look up that one last bit of research, but first, don’t forget to check out the BRENDA NOVAK ON-LINE AUCTION FOR DIABETES RESEARCH. The auction is down to the final days, which is when most of the real bidding gets underway. There are some spectacular items up for grabs, plus a couple of raffle giveaways that you can get in on for only a $10 ticket. I’ve already won two auctions, plus a special one-day giveaway drawing! Yay, me!
.
Okay, have a wonderful week, and I’ll see you back here next Sunday!
.
xoxo
DBR