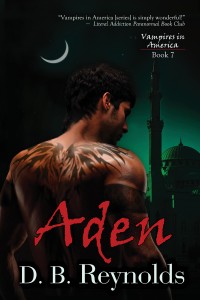 ADEN was reviewed in RT Book Reviews March edition, and he got a Scorching 4 1/2 stars and a TOP PICK! Yay! Here’s what they had to say about my newest baby boy … okay, so he’s a super alpha vampire lord, but he’s my baby boy!

SOPHIA has been officially re-released with her new cover, which I L.O.V.E.

And at long last, RAJMUND’s re-release with his new cover is available in print as well as e-book. Yay! So pretty!

We don’t have DUNCAN’s cover yet, but we’re working on it. LUCAS, too. Just to be clear, these re-releases have new covers, but the text inside is the same book.

This was another complicated week. My DH ended up in the hospital again for three days, which meant I spent most of my time there, too. I made an interesting discovery, though. I read scenes all the time where a couple end up together in his or her hospital bed. In fact, one of my very favorite scenes from one of my very favorite books, Nalini Singh’s Play of Passion, is when Indigo climbs into Drew’s hospital bed after he regains consciousness. But while I love the scene, I’ve always doubted such a thing was possible. I figured the beds weren’t actually big enough. Well, they are. The damn chairs in the hospital room were so uncomfortable that I climbed into bed with my DH and we fit just fine. 😀 The Doc was a bit surprised, though. LOL

He’s back home at last, so we’re both sleeping better, and I’m back on my writing schedule. And speaking of writing, I’ll be doing a couple of short pieces for Valentine’s Day. One for my friend Gareth at FALCATA TIMES about sexy underwear, and a special Valentine’s Day Vampire Vignette by special request, which will publish right here on my blog.

Okay, that’s it for this week. Yay for ADEN’s Top Pick! And I’ll see you all next week.

5 thoughts on “BIG LOVE FOR ADEN!”