No, not me personally! The first Cyn & Raphael e-novella!! And here’s the cover. I love Raphael’s sexy hand. I have a weakness for men with beautiful hands. Plus, you can’t see it here, ‘cuz I don’t have the hi rez image yet, but Raphael’s eyes are black with a silver spark. So pretty. 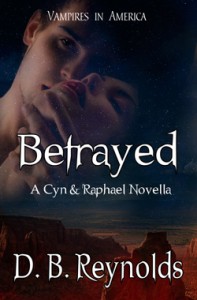 Don’t forget, the release date is August 15, although some reviewers are already reading it, and the reports are good so far.
.
Okay, now that the big news is done with, let me say I’m typing this from my desktop computer, which is a pain in the butt! My network router is having a nervous breakdown, so I’ve had to abandon my comfy chair and laptop, and work in my home office in order to connect directly to my modem. Argh! I don’t have the time or inclination at 1:00 in the morning to diagnose the damn router problem. So I bit the bullet and moved in here. Stupid router.
.
On the plus side, I managed to post several reviews this week! Of course, now I’ve read even more books, so I have more reviews to post, but at least the review pile’s getting shorter. You can check out the latest reviews under the WHAT I’M READING NOW tab above, or on my bookshelf at GOODREADS.COM.
.
On the big screen … I didn’t see any movies this week. Or last week either. I will definitely be seeing Dark Knight Rising very soon, and I can hardly wait for Bourne Legacy! I loved the Matt Damon Bourne movies, and Jeremy Renner is one of my favorite actors.
.
On the small screen, aka television, I watched with bated breath tonight as the JPL rover Curiosity touched down on Mars!! I was in geek heaven, watching it on a live feed from JPL. It landed perfectly, and we saw thumbnail images almost immediately. There was much geek hugging and kissing in the control center. It was a beautiful thing. You can check it out yourself at the JPL/NASA website
.
More small screen news and reviews … I watched last week’s (July 30) episode of TRUE BLOOD, and this is my report … (1) watching the Alcide sex scene … Sookie doesn’t know what she missed. Hot, hot, hot!!! (2) Bill is (as I’ve always known) a wimp. One minute he’s all “I won’t be bullied into killing the mother of a child (in a southern accent, of course,) and the next he’s all “outta my way, Salome, gimme some neck!!” WTF? (3) Eric is the only rational one, and how wrong is that? Eric’s supposed to be a crazy, bloodthirsty Viking, not the only sane vampire in the room!
.
Now, my next comments relate to both last week and this week. First, I am SO glad that the Terry and the Ifrit storyline is OVER! Didn’t care then, don’t care now! I am glad, however, that at least Lafayette made some money on the deal. LOL And as for the creature who killed Sookie’s parents … Am I the only one who thought Claudine was yelling “Waldo” instead of “Warlow?” And I was thinking, Well, THAT’s where he’s been all this time!”
.
But mostly, as I watched this week’s episode with the gory, charred looking Lilith and still boring, but bloodthirsty Bill, and naked guys on lit-from-below tables being eaten alive, and pigs and Bud Dearborn and Fangtasia going to hell … and all I could think was … What the hell happened to this show? This is kind of like Season 2 when they went nuts with Mariann and the naked middle-aged orgies, which had no place in the books. I’m having trouble figuring out a reason to keep watching at this point. If not for my DVR, I wouldn’t watch at all.
.
Not all is lost in TV land, however. Well, not for a couple of weeks anyway. LONGMIRE returned this week, but it only has one more episode to go, which is sad. FALLING SKIES came back, too. I’m not sure how many episodes they have left, but in this week, they reached Charleston, and contrary to expectations, all is not lost. Well, except for the harnessed little girl who lost her guardian and now … who the heck knows? Is she connected, is she not? She’s definitely in dire need of a good manicure!
.
Okay, that’s it for this week. I’ll be back next week with a new contest to celebrate my 700th Facebook friend! In the meantime, be sure and mark your calendars for August 15 and BETRAYED, and I’ll see you next Sunday.
.
xoxo
DBR