AND HOW DID YOU SPEND YOUR WEEK?

My week was devoted to RWA’s National Conference. Getting ready for it, fighting traffic to get there (groan) and BEING THERE! It was terrific.
.
First, there was the Literacy Signing, and so many of my readers came by to say “Hi!” Of course, most of you already had the books, but a few bought autographed print versions, so I did my part for the fundraising. It was so nice to meet so many readers, both at the signing and in other Con events, so many of you I “see” here and on Goodreads, and to meet you in person was lovely. Lynn Marshall, who was sitting next to me at the Signing, commented how enthusiastic my readers were and how much they loved the books! And I couldn’t agree more. I’m a lucky, lucky writer to have such wonderful readers!
.
I have a couple of pictures from the Signing, too. First up is me and Stephanie from PARANORMAL HAVEN.

Steph and Athenna have hosted me at the Haven many times, and I was so happy to finally meet Stephanie in person.
.
And then … one of my personal favorite authors, the oh so talented Nalini Singh, was signing just a few feet away, so I dropped by to tell her how much I love her books and grab a picture. 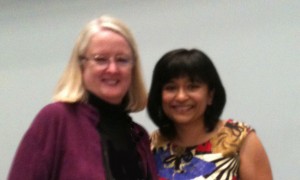 I met so many talented writers, including the lovely Morgan Ashbury—who happens to be a fellow member of Kelley Armstrong’s OWG—and I spoke with agents and editors and booksellers, and even hostage negotiator, Lt. Michael Woodcock who gave a very informative workshop along with his wife, the bestselling author, Angela Knight. And I won the giveaway ARC of Angela’s forthcoming book, too! I took lots of notes, so now I need to write a story with that scenario in it!
.
So, yes, it was great. But so was coming home at last. I was ready to sleep for a day! Unfortunately, there was laundry to do. LOL But it’s still nice to be home and not have to face L.A. traffic for a while.
.
Believe it or not, I didn’t watch this week’s TRUE BLOOD yet! I just haven’t had time to catch up on TV shows. They’re waiting on my DVR for me, though, so I will watch them and report later. Speaking of TV shows, THE KILLING, which I really enjoyed, but which lost A LOT of viewers when it didn’t reveal Rosie’s killer until the end of Season 2, will NOT be coming back for a third season. The way they ended Season 2 was a big clue, but there really wasn’t anywhere for them to go with Season 3. And my favorites LONGMIRE and FALLING SKIES both took a break for the Olympics.
.
Now, back to Vampires in America … I still don’t have a cover for the first CYN/RAPHAEL e-novella. My artist had a family crisis that had to take precedence. The cover’s almost done, but not quite. I do however have a title … and a release date!! BETRAYED will release on AUGUST 15th. So, just a couple of weeks and you’ll have a brand new Cyn/Raphael e-novella to read!! And I’ll be doing some promo with giveaways, which I’ll announce before then.
.
Well, that’s it for this week. I will watch TRUE BLOOD and let you know what I think so far. And I will try very hard to get some book reviews up, now that the crush of RWA is over with.
.
See you back here next week!

6 thoughts on “AND HOW DID YOU SPEND YOUR WEEK?”