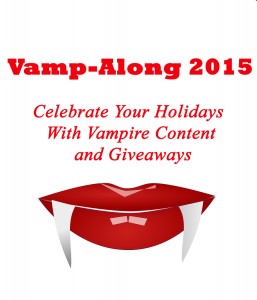 Vamp-Along 2015 starts TODAY! It’s ten days of giveaways and shared content, ending with some very special bonus content (a Vampire Vignette by any other name …) featuring Natalie and Christian and . . . well, let’s just say, don’t read it, if you don’t want to know.

But the KEY to all of this is SIGNING UP! In order to participate in the giveaways and/or to read the original bonus content, you have to SIGN UP. The special scene will be emailed to everyone who signs up, so if you don’t sign up, you won’t be reading the scene until I post or publish it at some undetermined later date.

You can also find all the latest information on the VAMP-ALONG 2015 FACEBOOK PAGE, which happens to have my favorite Raj on the banner.

One final note for those who’ve been patiently waiting for the audio books to continue (i.e., where’s DUNCAN??) I received some good news late Friday … a new narrator has been selected and the recordings will resume in January! Yay! I’ll have more news on the narrator for you next week, but I’m pretty excited.

I’ve been doing my final edit/revision on the Cyn/Raphael/Nick novella this weekend, then it will be back to Bloodstone, the first book of The Stone Warriors, which is Nick’s spin-off. I’m pretty excited about that, too. You should also know that I took the first step toward a second Shifter Planet book this week. (Squeee!)