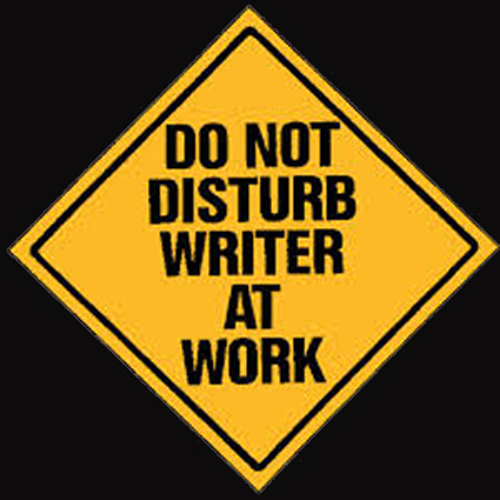 Note the BIG sign! That’s because writing is pretty much all I’ve been doing this week. I’ve brought all the comforts of home into the cave. I’ve got my comfy chair, my water bottle, my Smart Puffs, and my ice cream mini-drumsticks. And I’ve got Christian and Natalie and a whole lot of other hunky vamps, so I’m set. By the way, Christian is a very naughty vamp, and I’m pretty sure he’s planning on corrupting Natalie. Thank goodness! 😀

Fortunately, there’s also satellite in the cave, so I can rest my brain on occasion, catching up on the season finales of SUPERNATURAL and GRIMM. SUPERNATURAL was great. Dean is such a sexy devil, with that seductive voice. MmmMmm. And it was nice to see the brothers together at the end for a change. As for GRIMM—MAJOR SPOILERS!!!! I MEAN MAJOR, MAJOR SPOILERS!—I’ve wanted to get rid of Juliet from the very first episode, so I was thrilled when Trubel took her out. At last!!! I confess I kept waiting for Nick’s mom to not be dead, though, because I wondered what happened to her body?? And I never for one minute believed the old King could get the best of Diana. I’ll be curious to see what happens next, though. Who inherits? And are the writers going to put Nick and Adalind together???? I hope not.

I also watched the two-hour premiere of Aquarius with David Duchovny, whom I really like. He’s smart and sexy, an unbeatable combination. I liked the show, too. From the trailer, I didn’t expect Duchovny’s character to be sympathetic, but he really is.

And that’s it for non-writing activities this week. Other than, you know, cooking and cleaning, but who wants to hear about that?? 😀 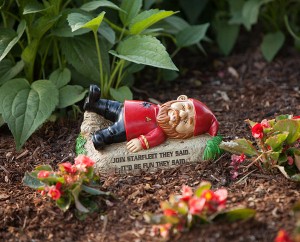 I did manage to pick up a new gnome for my garden. It goes along with my Godzilla eating the garden gnomes one.

As amazing as it seems, it’s June already, which is why I’m heading back into the cave tonight. Deadlines are looming! So, Happy June, Happy Week, and I’ll see you here next Sunday.