WHO’S GOING TO SAVE COLIN?

Lucifer’s cover is still being finalized, but here’s a sneak peek at the back cover copy. As promised, Lucifer is working to get Colin and Sophia reunited, and … other stuff, too. I can hardly wait for you all to see the cover, though. My Lucifer is gorgeous!

Montreal, Quebec … A charming city on the St. Lawrence River, historic, sophisticated, but beneath it all lies an extensive underground where treacherous vampires are plotting to seize the country.

Lucifer Scuderi is a vampire–handsome and charismatic, a powerful hunter of unusual skill–who arrives in Montreal to take on the most important hunt of his life. Someone has kidnapped the mate of Canada’s ruling vampire lord, and it’s up to Lucifer to find him before his death sets off a crisis that could engulf the entire continent.

Eleanor Morel lost everything—including the love of her life–when she became a vampire. But now, twenty years later, she’s a trusted bodyguard to the Canadian lord, Sophia, and the only person Sophia can count on to lead the search for her endangered mate. But what Eleanor doesn’t know is that the special hunter she’ll be working with is none other than her long lost love. And he’s demanding answers.

Lucifer’s love for Eleanor burns as hot as his anger towards her for leaving him. But they’ll have to find a way to set history aside and work together if they’re going to unravel the twisted betrayal that threatens not only Sophia and her mate, but all of North America. Because the European vampires are on the move. And if Canada falls, the rest of North America could follow…. 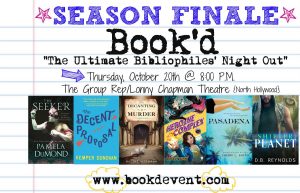 Your weekly reminder … I’ll be reading from Shifter Planet and signing books at the October Book’d event in North Hollywood, CA, so please come see me if you’re in the area! Admission is only $10.00, and you can find all of the details HERE. 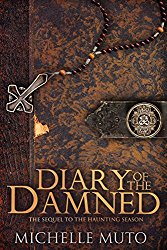 I’m going back to work, but a final note … if you want to read a truly scary book for Halloween, you need to check out Michelle Muto’s DIARY of the DAMNED. It’s a sequel to her bestselling and very creepy THE HAUNTING SEASON. If you love scary books, you need to read these!

Okay, now I’m really going back to work. Kato is demanding I write his story, and he’s got some serious dark magic, so I don’t want to cross him!