THE BLOG TOUR ROLLS ON! 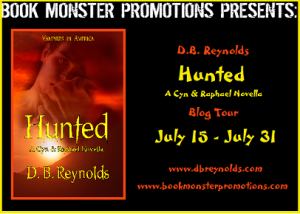 The HUNTED blog tour is in full swing. We’re at the halfway point and if you haven’t joined in yet, you’ve missed the story of how I met my first vampire and how he inspired Raphael, and a bunch of interviews, plus a lot of chances to win the Grand Prize, which is a complete autographed set of the books and novellas.

But not to worry. There’s still lots of dates coming up with more interviews and more guest posts, including a quick story of Nicholas and the kissing booth–you remember Nicholas, Lucas’s luscious, blond, frat boy lieutenant?

My publisher has confirmed that there will be a limited edition print version of HUNTED. This will never be released for sale, so your only chance to get one is to win it! I’ll be having more contests in the future, but once they’re gone, that’s it. No more, until the omnibus comes out, and that won’t be until all four of the current novellas are written. And that could be awhile.

By the way, if you’re one of my readers who has already won a copy of HUNTED, there was a printing error in the books I received this week, so they’re being re-run. Which means a small delay in getting them out to you.

The past week was quiet, but productive. I completed the revisions on ADEN, and he’s off to my publisher. He’ll come back to me for proofing, and maybe a few more revisions. But our long nights together are pretty much done. I’m gonna miss him. He’s got a tough exterior, but once you get to know him, he’s a sweetheart. And you couldn’t ask for a better protector. Sidonie’s a lucky woman. ::sigh:: It’s always so difficult to let go of my guys.

I had some time this week to catch up on things. I finally started putting my office back in order, and have gotten through half of the boxes of books and files that were piled in my garage. Another week and maybe I’ll be able to put my truck back in there!!

I also watched some TV, including the awful movie that it seems everyone’s talking about … Sharknado. Really? That thing was horrible. I live on the West Side of L. A. where it was supposedly set and it made no sense! Not to mention the shots where the two supposed surfers are walking along the beach with completely flat waves, and then they look out and comment how rough it is (it’s not) and then they cut to an image of a totally storm tossed ocean and then back to the completely flat water on the shoreline. Dude! This is Santa Monica Bay! It doesn’t work like that! And then they’re out on the (flat) water, and they say “this is it!” and they start paddling for an effing non-existent wave! And then there’s the house so full of water that effing sharks are swimming in it, but for some reason the driveway in front of the house has no water at all so that our hero(?) can drive away. And the helicopter flying into the tornado to deliver a bomb. Oh. My. God. It was the stupidest movie I’ve ever seen, and I worked in Hollywood—I’ve seen some stupid movies! This was so bad, it wasn’t even funny bad.

Okay, I’m finished with my Sharknado rant. By the way, they’re making a Sharknado 2. Clearly the end is upon us.

On the other hand, True Blood is actually pretty good this season. Love the Eric-in-the-prison scenes and how he outwits and out-guts (yes, I mean guts, as in he’s got loads and his captors have none) the humans who think he’s their prisoner. Alex Skarsgard is sexier than ever, and Jason is shaping up to be a real person instead of a caricature. I like the twist with Warlow (who, btw, is not in the books) being the good guy, although I thought the scene with him and Sookie was one of the least sensuous sex scenes I’ve ever seen.

And speaking of books, I’ve added several to my 100 Books in a Year challenge. I’m well into the 80s and it’s still July, so I’m pretty sure I’m going to make it! 😀

Don’t forget to stop in at Sofia Grey’s blog for her JULY FEVER feature. I’ll be there on July 31, but there are many other authors, plus weekly and daily prizes.

Finally, I want to thank all of you who went out and bought HUNTED, and especially those of you who left such wonderful reviews! I have the best readers in the world!

I’ll see you all next Monday, same time, same place. Have a great week!
xoxo
DBR