It’s the last week of November, which for over 200,000 writers around the world means … no more sleep until you hit 50K. Okay, so maybe I’m exaggerating just a little. But the pressure is definitely on. I edged up to 40K last night. I’ll cross it later tonight, which is why this post will be a fly-by version. The days are counting down …
.
And speaking of sleepless nights, I posted this to my Facebook page this week, but it’s just too perfect not to share. I’d like to claim this is only me during NaNoWriMo, but that would be lying. 🙂 I am NOT a morning person. Friends and family know if they schedule something before noon, I probably won’t be there … not on time anyway. By the way, credit where credit is due, I got this picture from WANTED FOR FUN on Facebook
. 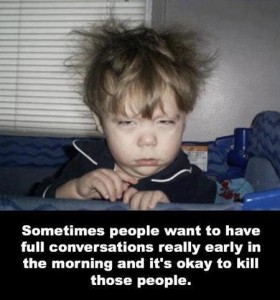 .
In other news, I finally saw the movie Paranormal Activity this week, although it was by accident. I never saw it in the theater, because I assumed it was going to be another Blair Witch Project. The jerky camera in that one made me sick to my stomach, and frankly I didn’t find it all that scary. But one day this week my DH was watching something on the big screen when I wanted to exercise, so I pulled up Netflix on my i-Pad instead. Usually it goes automatically to whatever I was watching last time, so I expected another episode of The Guardian (Simon Baker’s old series.) I hit play and I’m watching this video playback, and I’m waiting for it to become the Guardian’s new case, but it just keeps playing … and I finally realize something’s not right. But by then I’m totally sucked in and that movie was effing scary!! Plus SPOILER ALERT I can’t believe they ended it that way, and I’m really worried about Hunter!!! LOL
.
I also happened to watch an old episode of Castle (exercising again) and Sasha Roiz (Captain Renard from Grimm) was playing this sleazy daytime soap actor who’s a total druggie! He’s such a hunk on Grimm, so, er, grim and masculine. Cracked me up.
.
Books – I finished Larissa Ione’s ROGUE RIDER, the fourth (and final, sort of) book in her Lords of Deliverance series. And I’m currently reading DANGEROUS WATERS, a romantic suspense by a new-to-me author, Toni Anderson. Excellent so far. I’ll review that one when I’m finished. Looking forward this week to SHADOW’S CLAIM, the first book of Kresley Cole’s new Immortals After Dark spin-off, The Dacians. I love her writing and I love IAD!
.
And that’s about it for me this week. I’m back to bumping the NaNoWriMo edge. But I’ll be back next week with a brand new contest aimed at readers only. In order to enter successfully, you’ll have to answer a question that only someone who’s read the books will know, and there will be cool prizes just in time for the holidays!
.
So, here’s hoping the turkey in your fridge is finally GONE! Have a good week, and I’ll see you back here in December! (yep, next Sunday is December 2 – better get shopping!)
.
DBR