Yes, it’s that time of year again … November … which means the year is almost over and it’s time for holiday shopping. Oh, yeah, and Thanksgiving dinner, too. Personally, I’d be thankful if someone else was cooking dinner. 😀

But before we stuff ourselves on turkey, there’s lots more going on, including a series profile for my Vampires over at LITERAL ADDICTION all day today.

Over in their CHARACTER’S CORNER you can read the first ever character interview with lucious LUCAS and KATHRYN. And this afternoon/evening (November 19) I’ll be doing a LIVE CHAT from 8-9 EST/5-6 PST. 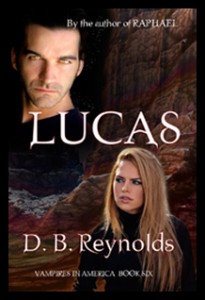 And speaking of chats, the Release Party at Bitten by Books was a huge success, lots of great questions and a terrific giveaway. That giveaway is closed now, but there will be more coming. And there was more wonderful news for my Vampires from Bitten by Books this week. A new review was published giving DUNCAN a whopping 4 1/2 Tombstones!! WooHoo! You can read all about it HERE! Yay for DUNCAN! 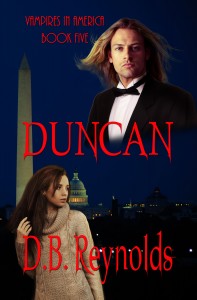 I posted my review of Vince Flynn’s THE LAST MAN on MY GOODREADS PAGE . It’s another terrific Mitch Rapp novel, full of intrigue, action and suspense. I’m sad I have to wait another year for the next installment. 🙁 I also posted a short review of Juliana Stone’s e-novella, WRONG SIDE OF HELL, which is the introduction to her new League of Guardians series.

On the small screen, I caught up with GRIMM this week. That show really took off with the second season, with the actors settling into their roles, and the writers focusing on the action and mystery angle. It probably helped (in my estimation) that Juliet was sidelined for much of the season. I don’t find her character appealing and think she detracts from the show. But they KILLED me with their season ender!! It was such a cliffhanger that the producers actually included an apology in the title card at the end. You know it’s bad when that happens. LOL I’m a couple shows behind on SUPERNATURAL, believe it or not. With NaNoWriMo, I just haven’t had time to do as much TV watching. And speaking of NaNo, I’d like to get a few hundred more words in tonight. I’m running behind and need to catch up!
.
So, I’ll sign off with a holiday greeting to my U.S. readers. I went looking for an image to include with this greeting, and I found all sorts of truly disturbing pictures of Thanksgiving food, including far too many of turkeys doing unnatural things. But in the end I went with the classic. So, Happy Thanksgiving. Hope you spend it with those you love and who love you back. 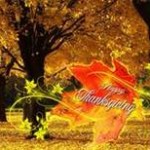 And I hope to see you TODAY over at LITERAL ADDICTION for my LIVE CHAT!

3 thoughts on “GREETINGS, GIVEAWAYS AND REVIEWS!”