Hard to believe, but the first draft of VINCENT is done! I’m kind of in shock. So, what happens now? I go back and start over again, do a final run through, tweek some continuity, and have a kind and generous friend check my Spanish (desperately needed.) But my first drafts are fairly complete and clean, so, really … VINCENT is written. Woot! Here’s my beautiful boy now!

I rewarded myself for finishing Book 9(!!!) by watching a movie with the DH last night. I, FRANKENSTEIN on PPV. I’m a fan of Aaron Ackhart and I liked the reworking of the Frankenstein myth, plus the gargoyle CGI was, for the most part, great. But the movie seemed somehow … lacking. Not enough drama, not enough sympathetic characters. Frankenstein wasn’t really sympathetic until the VERY end, and the supposed good guys, the gargoyles—who oddly were the soldiers of heaven?—anyway, they weren’t much better than the demons, except for two who died together early on (and whose love was forbidden although we didn’t discover they were even in love until they were already dying.) Anyway, for a PPV movie in the comfort of home, it was okay.

There were also lots of season finales on the small screen this week. Great ending on MARVEL: Agents of SHIELD. That show is so cleverly written. I do love it. BLACKLIST was just brilliant. Such a good show. HANNIBAL—I can honestly say I have no idea how this season is going to end. I know it’s been renewed for another season. I suspect the writers had different endings depending on whether they were renewed or not, but, hell, I might be wrong about that. It such a strange show, and it’s getting amazingly gruesome. Yikes. GRIMM—the producers drive me nuts with their cliffhanger endings. Except for me in this case, the cliffhanger is whether the annoying Juliet will finally be written out of the script. I have high hopes for her departure. 😀 THE MENTALIST … I’m not feeling the love between Jane and Lisbon. They have ZERO chemistry. Also, I like the casual way Lisbon dismissed her new fiance’s feelings. “He’ll get over it.” Sheesh.

We now head into the Summer season, but I think most of my last summer’s shows were cancelled, so I’m not sure what I have to look forward to.

Books, I’m making progress on my 2014 Challenge … only 4 books behind schedule now. 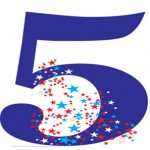 And now, as promised, we have WINNERS in the 5-Year Blogaversary Giveaway!! Three winners were selected at random from all of the qualified entries, which means all of the entries which correctly answered the question: What’s the Name of Robbie’s Spouse? The correct answer is Irina, and for the record she’s a vampire and she’s Raphael’s Housekeeper with a capital H, which means she runs the entire, rather substantial, household.

And the winners are …

The above winners have all been contacted via email. They now have FIVE (5) DAYS TO CONTACT ME or another winner will be chosen.

Congratulations to all of my Blogaversary Giveaway winners, and thanks to everyone who entered..

I’m off now to start VINCENT all over again. Have a terrific week and I’ll see you back here next Sunday/Monday night.

3 thoughts on “DONE and WINNERS!”