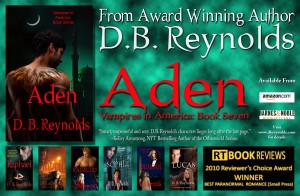 Still waiting for a firm release on ADEN, but everything I’ve been told indicates the late November date is still good. So, fingers crossed! I’ll be doing a blog tour, probably in December, giving away books and other stuff, too. Stay tuned for details.

For those of you who missed it on Facebook, I posted this amazing video. I’ve watched it a few times and it still amazes!

I live in a canyon, myself, and thought I’d share a picture of our very own giant rock! That’s the main highway it’s sitting on. There’s only one road that runs through our canyon, with an entrance/exit at each end. This big rock blocked access to one of those exit/entrances for weeks! The rock fell while the DH and I were away in South America, and when we returned, we had to go hella round the long way to get home from the airport. Pissed us off! LOL 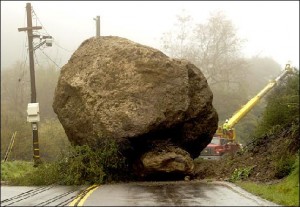 I’m still updating my 100 BOOK Challenge Page even though I’ve already made it, and I posted a couple of reviews on GoodReads.

Also this week, I finished the revisions on my Cat Shifter story and sent it off to be read by friends and publishers. Next up, I’ll be going back to my werewolf/demon story which will be my NaNoWriMo project this year. It’s impossible to believe, but it’s nearly November again. For those of you who don’t know what NaNo is, HERE’S THE LINK!

And now, since I’ve already shared an ADEN snippet, I thought I’d introduce you to my cat shifters. Meet our hero, Rhodry de Mendoza, and his cousin Aidan (hmm, I never made that name connection before) and the very human heroine of our story, Amanda Sumner.

“You think Cristobal will let you go?” Aidan asked doubtfully.

“Aye, but he’s got you here now. And he’s made it clear that I and the lads aren’t welcome to stay. Maybe that’s what he had in mind all along, and the Earthers just gave him a convenient excuse. Maybe he wants to keep the de Mendoza Clan Chief here in the city, far away from your own people.” He frowned. “It won’t work, lad. The Martyns could lock you away for years and we’d never forget you. You know that.”

“Well, no, I wouldn’t. But I was making a point. I don’t like leaving you here on your own.”

Rhodry sighed deeply. “And I don’t like being here, but it’s not worth making a fuss over. I’ll be fine. The Guild Hall is welcoming enough and as long as I’ve got the Green, I can survive a few months of Martyn politics.”

“I could stay down in the city—”

“Go home, Aidan. No need for both of us to be miserable.” The gleam in his cousin’s eye warned him a heartbeat before he heard her voice.

Rhodry gave Aidan a filthy look for not giving him more warning, then schooled his face to polite disinterest and turned on his heel to find the Sumner woman looking up at him expectantly. Not that she had to look up very far. She was tall for a woman, especially a woman on Harp. And he liked tall women. Just not this woman, he reminded himself.

“Lieutenant Sumner,” he acknowledged. “I trust you’re enjoying your evening?”

“Yes, I am,” she said, smiling. “And I trust my choice of apparel meets with your approval?”

Rhodry gave her a narrow look, noting the spark of mischief in her blue eyes. “The white is—”

“Aidan Devlin,” his cousin interrupted before Rhodry could say something indiscreet. He took Sumner’s proffered hand, but instead of shaking it, he raised it to his lips with a small bow. “A pleasure, Lieutenant.”

She laughed at his damn cousin’s antics. “Call me Amanda, please. There’s no need to be formal is there?”

“Of course not, Amanda,” Aidan assured her. “Harp is usually a very informal place, although tonight the Ardrigh and his lady seem determined to prove me wrong.”

She turned and surveyed the gathering as Rhodi had done earlier, studying her fellow fleet officers in their starched whites, the Harp officials in formal black, with the colorful ladies scattered in between. “It is all a bit stuffy, isn’t it? I’m sure you’d rather be outside. I know I would,” she muttered, then cast a glance at him over her shoulder. “I suppose you don’t go out into the forests much at night, though, do you?” she asked with what Rhodry would have sworn was wistfulness.

Instead of being properly chastened, she gave him a wicked grin, then leaned over to Aidan and said confidingly, “Rhodry here is upset because I didn’t ask permission before going out into the forest today. Tell me, is he always this strict?”

Aidan laughed along with her, which earned him a disbelieving glare from Rhodry. “Not at all, lass. You’ve just got to catch him in the right mood. Why I’ve seen our Rhodi—”

Hope you enjoyed that, and I hope you get to read a lot more before too long. In the meantime, I’ve got to get back to my werewolves and demons. More studly heroes for me!

3 thoughts on “FALL IS OFFICIALLY HERE”