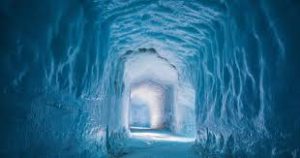 You all know what this means, right? Yep, I’m in the cave again. Although it seems to have gotten colder since I’ve been gone…there’s ice everywhere! Nothing’s been the same since we locked down in March, and now we’re locked down again. Fortunately, I have Eddie to keep me company now. My hands might be covered in scratches and little fang bites, but she’s a good companion, and even permits the occasional cuddle when she’s in the mood. lol 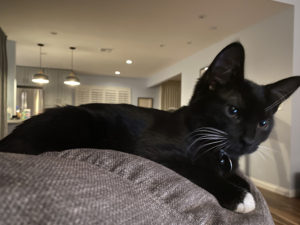 There she is, awake for a change, keeping guard while I write, and thankfully not offering any “helpful” suggestions.

I have the fireplace going, calming music playing, and hot water for tea and cocoa close at hand, so we’re doing great. NICODEMUS’s story is flowing, though it doesn’t want to end. Nick’s life was long, which means I’ve had to decide which parts to include. Otherwise, I’d still be writing this book next summer. lol

As promised, however, today I bring you a snippet. Fair warning: This is an UNEDITED piece of a larger scene that hasn’t been read by anyone but me. So when the scene shows up in the book, it might look very different from what you’re about to read. The snippet’s still covered by my copyright, however. Heh, heh.

So, have a look, and enjoy the first time Nicodemus meets Antonia…
—————————
Nico lifted a flagon of ale, intending to wet his throat, when the soft scuff of a footfall on the stone stairs made him set down the ale and turn, a defensive spell on the tips of his fingers. His servants had standing orders never to climb those stairs, and his four warriors would never have stepped so softly.

He was on his feet, eyes focused on the final turn of stair visible through the open door, when the very last person he’d have expected came around the curve and, seeing his martial pose, went perfectly still.

He’d never heard her voice before, and was surprised to find it as melodious as the morning birdsong outside his bedroom window. He lifted his gaze from the automatic perusal of her feminine form, and caught the slight twinkle of amusement in pale gray eyes.

“Lady Antonia.” He managed to utter her name without embarrassing himself, and wondered what had overtaken him. He did not become flustered in the presence of even the most beautiful women. But this one, who was lovely but not the equal of some, had him as tongue-tied as a raw youth. Not to mention that she belonged to Sotiris, which surely made her an enemy. For all that she never appeared on the battlefield, it was well known that she had significant power, and was particularly skilled at both conjuring and casting spells.

Dark lashes fell demurely over those pale eyes as she stepped into the room, and when she looked up again, all traces of humor were gone, hidden behind a mask of polite perfection. “Forgive me for intruding, my lord. I would not have done so, if the situation were not,” she hesitated before choosing her next word, “critical.”

Intrigued enough that his unusual first reaction to her presence fell away, Nico swept his arm toward the small, sunlit seating area, which was much neater than the rest of the room, solely because he never used it. “Sit, my lady. I have ale, but I can ring for tea, if you’d—”

She laughed, and his heart seemed to pulse harder against his chest for a beat. By all the gods in heaven and hell, how had Sotiris managed to hold such a light spirit for so many years? And what was she doing here? Now?

“I am not so delicate that I don’t enjoy a fine ale, my lord.”

At his charming best—which was damn good—Nico smiled and filled another flagon, giving her the same full measure as when he topped off his own. He delivered hers with a courtly bow, before sitting on the chair opposite and waiting politely until after she’d taken a sip to ask the obvious. “My tower is always open to a lovely woman, my lady. Though it is rare that one has sufficient magic to make it this far without mishap.”

“You flatter me, my lord. I am more than aware of your own power, and have no doubt you permitted me to approach you.”

It wasn’t true, but he wasn’t going to tell her that. He was intrigued, however, because he was aware of her power, too. And she didn’t have the strength to approach him without notice, much less to access his most private tower. Though he doubted she’d have been able to cross the room’s threshold without serious injury to herself, had he not invited her to do so.

He remained silent, waiting for her to venture her reasons for being there, sipping his ale as if her visit was nothing unusual.

She shot him a quick glance, then another, before a sigh offered her surrender to their unspoken test of wills. “May I speak frankly, Lord Nicodemus. And with assurances that this conversation will not reach my lord Sotiris’s ears?”

Nico cocked his head curiously. “I can assure you for my part, Lady Antonia.”

“That will do, since I value my life too much to whisper a single word of it myself.”

He came alert. “If you are in danger, my lady—”

She waved one delicate hand. “Nothing so drastic. Not yet, and not ever, if you hold to your assurance.”

She met his gaze steadily, as if looking into his soul. “And I have heard that you are that rare being…an honorable man of power and title.”

Nico dipped his head slightly, acknowledging the compliment, but held to his patience, waiting for her to begin.

“I had not heard,” she said tartly, “that you were a man of such patience.”

It was his turn to laugh. “My mother will be pleased that you think so. What brings you here, my lady?”

“Save your breath and time. Call me Antonia,” she said impatiently.

“And I am Nico,” he said, too charmed to tease her any further, and surprised that he’d been inclined to do so thus far.

“Nico,” she repeated, as if tasting the name. “I had wondered if your family shortened the name any. Sotiris never calls you anything but Nicodemus. When he’s being polite, that is.”

“Which brings us to my surprise at finding you on my doorstep.”

Well, that was fairly long. More of an excerpt than a snippet. An exppet, maybe?

Hope you enjoyed it anyway. I don’t have a firm release date yet, but I expect it to be in the early spring. I’m going back to working on it now. I’ve set a deadline for myself, and I’m determined to make it. I did “win” NaNoWriMo again this year, which means I wrote at least 50K words in the month of November. Did you know that RAPHAEL was my very first NaNo project? And I’ve been doing it every year since, although there have been a couple years when I didn’t make the cut.

Stay safe out there. Wear a mask!