GABRIEL, DAMIAN, and where oh where is DB?

The good reviews for GABRIEL are still coming in (4.5 stars on GoodReads, 4.6 stars on Amazon!) This makes me a very happy author. I loved writing this book, and I’m so glad my longtime and new readers both loved reading it. 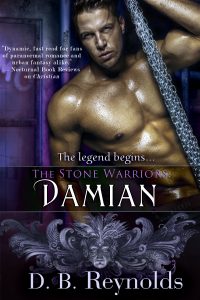 DAMIAN’s $0.99 e-book sale is officially over, but if you act quickly, you might still be able to grab a bargain before Amazon switches the price back!

WHERE OH WHERE IS DB?
That, my dear readers, is a good question. I feel as if I’ve lived away from my house more than I’ve been in it this year. As some of you know, California has been hit hard by wildfires this past week, starting with the Paradise fire which has already taken so many lives, and will probably take more as rescuers search the nightmarish devastation. Here in the South, we’ve been hit by the HUGE Woolsey fire which, according to some very experienced fire officials, has spread faster than any they’ve seen in their long careers. It’s now at over 85,000 acres with over 250,000 people evacuated, including yours truly. Having been up all night writing, I was actually sound asleep when the evac order came through. We’d lost all power to our neighborhood, which meant I had no cell, no internet, no landline, no TV. When I woke up, I left my house and went up a nearby hill to get a cell signal, and discovered a message from LA Fire Department ordering a mandatory evacuation. In hindsight, that explained the neighbors I’d seen packing up and leaving. (duh) I also found 22 messages from family and friends trying to find me. Sorry, guys. Anyway, our entire canyon is under mandatory evacuation, so I’ve taken up residence in a hotel. It’s very pleasant here, quiet and clean. Getting lots of writing done, because there’s nothing else to do. But I really want to go home. Fire officials are hopeful, although they’re still worried about the winds through Tuesday, apparently. But a member of our local Arson Watch has reported the fire on our front is holding steady, because on Saturday the very brave and dedicated fire crews worked through the day and night to dig fire breaks. Plus aircraft–both the giant super scooper and helicopters–are flying almost non-stop, taking advantage of a break in the winds.

In the meantime, I’m checking my home cameras obsessively (power has been restored – yay!) eating too much chocolate, and writing away on LACHLAN. The last part is more pleasure than anything else. He’s an interesting character, but then, I might be prejudiced. (((love)))

I’m adding a picture below, that I posted on FB, too. It’s from Zuma Beach in Malibu, and it says more about that city than any star’s house being destroyed. These are llamas tied up to a lifeguard station, with the sky orange all around from the fire. There were a lot of other animals, as well, and a lot of people both sheltering with the animals, and taking care of them. 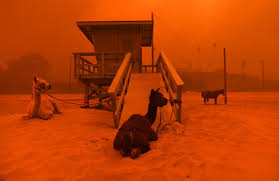 Okay, back to work. I’ve eaten all the chocolate I have (bummer,) but at least it keeps my fingers clean for typing. Have to go to the store tomorrow. (heh heh)