So what else is new, right? I’m almost always writing, but sometimes I’m pushing up against a deadline, and then I’m WRITING (all caps!) lol But right now I’m just writing, working on NICODEMUS, which is a uniquely challenging story. Nick’s been alive a very long time, and significant events that shaped who he became by the time we meet him in RAPHAEL occurred sometimes centuries apart. His story has to begin back in the time/world where he first met his warriors and Antonia, and what happened that day on the battlefield. But then his search begins. Not only for his warriors, but for Antonia. And, of course, somewhere in there he meets Cyn, and then Raphael. (heh,heh)

But let’s talk about XAVIER!!

“If you want something different in your vampire world I suggest you give author D.B. Reynolds’s XAVIER a try, you will not regret a moment and probably be looking for more of this author’s exceptional style of writing.”
-Fresh Fiction
FreshFiction.com posted the first editorial review, but not the only review. My most sincere thanks to all who bought XAVIER, and especially to the many wonderful readers who left reviews on Amazon and elsewhere. Most of you loved his story and are looking forward to reading more about Xavier and Layla, along with all the new vampires and their mates, as the stories move into the rest of Europe. So thank you from the bottom of my heart. XAVIER was written completely under COVID lockdown, and I along with most writers and other artistic types, continue to find lockdown very dampening to our creativity. My editor Brenda Chin was brilliant in digging into my head and reminding me what the story was supposed to be about. So she deserves huge thanks for this book.

So, yeah, here’s something I’ve always known, but that lockdown drove into my head. You can’t work all the time, even when you can barely leave your house. I’ve been working at home ever since I’ve been writing, and counted myself lucky to do it. I love writing, and frankly, I’m an introvert and so mostly love staying home. Of course, I loved it a lot more when I had a choice about it, which is something we’re all feeling right now. I took one road trip, which helped, but then I adopted a brand new kitten. She was adopted from a shelter, barely 3 weeks old and a day off the bottle when she came to live with me. She’s too young to road trip just yet, and though I know she’d be in good hands with family, I don’t want her to feel abandoned again. She’s very attached, since it’s only the two of us mostly 24 hours day.

So, I’ve been haunting Netflix, Prime, Apple+, and just about every other channel, looking for movies/series for me and Eddie (the cat, named after Edgar Allan Poe, of course) to watch on weekends, which I take off from “work.” I’ve encountered the good and the bad, so I thought I’d share a couple recommendations. 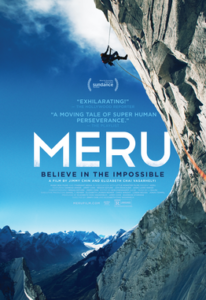 The best movie I’ve watched lately is Meru which is the story of three climbers and their struggle to climb the “Shark’s Fin” route on Meru Peak in the Indian Himalayas, which had never been done. It’s similar in style to Free Solo, which is another fantastic movie about the first free climb of El Capitan’s dawn wall. Both movies share the incredible cinematography talents of Jimmy Chin, who is also one of the three climbers in Meru. He’s filming and climbing. It’s an amazing story of perseverance, courage, and more than a little crazy-ass.

With Halloween coming up, everyone’s making a list of the best scary movies to watch. I read the critic’s list in Vanity Fair and one of their top five (they only listed 5) was The Evil Dead by Sam Raimi (1981.) This movie was originally shown at one of those movie festival viewings, where the backers are looking for money and distribution. Stephen King happened to be in the audience and (no surprise) LOVED it. He was vocal during the showing and wrote about it later. It’s generally believed that King’s support was a major factor in Raimi securing distribution. So, I had to watch it. Well (cough,cough) I should have known, right? Stephen King doesn’t exactly go for warm and fuzzy, does he? It’s an exceptionally gruesome movie, and having been made in 1981, it hasn’t aged well. BUT that said, Raimi’s direction can’t be faulted and you see the birth of techniques he uses over and over again to this day in movies like the Spiderman trilogy, Darkman, and… Disney’s Oz The Great and Powerful! You’ll see his talents next in the new Dr. Strange movie (2022, unless we’re still locked down!!)

That said, I have to have a bit of fun with The Evil Dead, right? Because what we have in the very first truly disturbing scene is…the most frightened girl (the one WITHOUT a boyfriend) who hears a noise, puts on her robe, and goes out into the foggy night at a cabin in the middle of nowhere woods, where they’ve already heard scary noises and found a weird diary.
ME WATCHING: What the hell is she doing?
GIRL: “Is anybody out there?”
ME WATCHING: Are you kidding me?
She’s attacked (I won’t say by what) escapes, runs, TRIPS (of course,) screams and pounds on the door, which her bad friends don’t hear (probably having sex—-filthy teenagers!) And I won’t tell you what happens next. You have to watch for yourself.
😂😂😂😂😂😂😂😂😂😂😂😂😂😂😂😂😂😂😂😂

And that’s it for me. Sorry this is late. Eddie’s been keeping me running. We’ve only hit a good routine this week, so that I can both work and sleep in sufficient quantities. Furry little dictator.

Stay safe out there. Wear a mask.
xoxo
DBR