This is just a quick recap of everything that happened last week. So much! 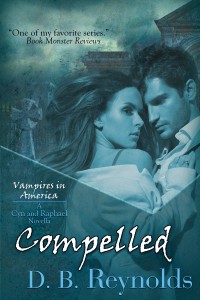 First off was the release of COMPELLED, the latest Cyn & Raphael novella. This novella serves as a transition to the spin-off series featuring Nick Katsaros. Nick, you may recall, was Cyn’s lover before she met Raphael, and he also showed up in DECEPTION with the key to Raphael’s escape from Mathilde. We also learned in DECEPTION that Nick was a sorcerer, much to Cyn’s surprise. In COMPELLED, Cyn discovers even more about Nick’s history, and the tragedy in his life that drives him. It’s a tragedy that forms the basis of the spin-off series, The Stone Warriors.

And that brings us to DAMIAN, Book One of The Stone Warriors, which will release on June 15th, and is currently available for pre-order. I’m very excited about this story. I’ve wanted to write the series for a long time, every since I wrote Nick into RAPHAEL and JABRIL. I always knew where he was going, and I’m thrilled to finally have a chance. I hope you all will love Nick and Damian as much as I do.

The DUNCAN Audible contest is officially over. There were way more entries than I expected, so I’m upping the number of prizes to three. I’ll be selecting three entries at random, and contacting the winners by email early this week.

Some readers have been asking about the next Vampires in America book, wondering if there is one. Let me say … DEFINITELY! Vampires in America Book 11 is LUCIFER, the next book in the Vampire Wars story arc. I’m working on that right now, and it will release in November. It picks up where CHRISTIAN left off with Sophia and Colin in crisis. As usual, the other Vampire Lords will be making some cameo appearances, too.

And that’s where I’m going now, back to life with LUCIFER. Happy May, and I’ll see you all next week.